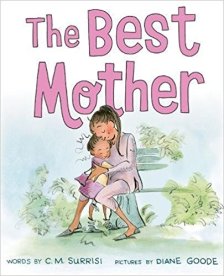 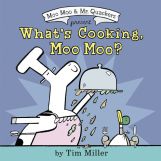 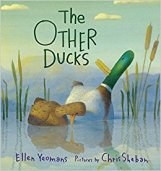 Bear is ravenous when he wakes up from his winter sleep and has one thing on his mind: honey! Alas, it is too soon for honey, so Bear tries hard to be patient. The world around him is waking up, too, and he soon remembers all the other things he loves, like warm grass, berries, and rain. He’s almost content, until, one day, he hears a welcome buzzing sound . . . and finally it is time for Bear to delight in the thing he relishes above all others–and it is as warm, golden, sweet, and good as he remembered.

When Maxine wakes up on the wrong side of the bed one morning, she wonders if the problem might be her mother. What if she could try out a new mom who doesn’t make her brush her teeth or comb her hair? Enlisting Mom to help her with the search, Maxine interviews various prospects to be her new mother at the park, the toy store, and the zoo. Unfortunately, these other mothers present a host of new problems and concerns. Maybe her “old mother” was the best mother of all? For every child who’s ever wondered if the grass is greener, The Best Mother affirms that there’s nothing better than your own mother’s love.

Lowell Harrelson wanted to turn trash into methane gas so he rented a barge called Mobro 4000. His plan was to ship the garbage from New York to North Carolina, but as the barge floated down the coast, no state would let him dock because of smelly waste on board! The barge became a mockery and the butt of many jokes in the media. What started as an attempted business venture turned into quite the predicament for Mr. Harrelson. Mobro 4000 roamed the seas for forty-five days and traveled a distance of 6,000 miles. While awaiting its fate, the trash floated in New York’s harbor, garnering much attention by onlookers. Green Peace activists put up a large banner across the barge that read, “NEXT TIME…TRY RECYCLING.”

Moo Moo serves up another half-baked scheme—and loyal Mr. Quackers goes along for the ride! Yes, for real! The hilarious cow-and-duck duo are opening their own five-star restaurant. You’ll want to see what udderly ridiculous antics they get up to in their new adventure.

Unfortunately, The Other Ducks never seem to come out of the water! Oh how This Duck and That Duck wish The Other Ducks would waddle outside the big puddle with them. But it’s getting colder and their feathers are starting to itch for warmer weather. Will these best friends ever find their companions? 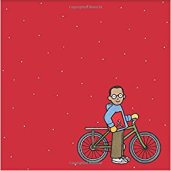 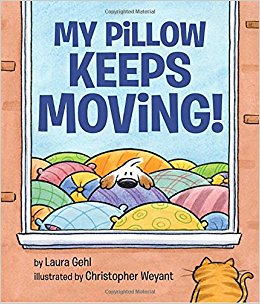 Various animals take turns shaking a tree in search of a tasty meal. It starts with Mouse who wants a nut so she shakes the tree a little to the right, and a little to the left. But it isn’t the nut that falls from the tree, it’s Fox who thinks that Mouse looks pretty tasty! Soon a warthog and then a bear come along with similar ideas. Little readers will enjoy the just-made-it escapes and the fun shaking-action that readers can do along with this interactive picture book. Translated from the Italian.

When a young boy finds an abandoned book, he discovers another world just as real as his own.

A clever pup ends up in a cozy home, and she’ll do anything to stay there. She impersonates everything the lonely homeowner needs–a pillow, a footstool, a jacket. But in the end, being herself works best.

Many: The Diversity of Life on Earth by Nicola Davies, illustrated by Emily Sutton

The more we study the world around us, the more living things we discover every day. The planet is full of millions of species of plants, birds, animals, and microbes, and every single one including us is part of a big, beautiful, complicated pattern. When humans interfere with parts of the pattern, by polluting the air and oceans, taking too much from the sea, and cutting down too many forests, animals and plants begin to disappear. What sort of world would it be if it went from having many types of living things to having just one?

Tim, Sam, and Lulu are the mischievous and naughty three little monkeys who are told each day to be good while Hilda goes off to do her errands. And each day, Hilda returns home to find a bigger mess than the day before. These mischievous monkeys will likely never learn to behave!

New technologies and scientific discoveries have given rise to genetically modified organisms (GMOs). While such advancements are usually considered forward steps, traditional, organic farmers have been under attack by large corporate farming interests seeking to dominate the food industry. Family farms, and specifically organic operations, are being forced out of business and pushed out of the way in pursuit of corporate profits.

Large chemical companies (Monsanto and Syngenta as examples) own patents on their GMO technology and focus much of their efforts on suing smaller farmers for patent infringement. Traditional, organic farmers, have consistently been under attack by these large corporate farming interests, who seek to dominate the food industry and run family farms out of business.

OF THE LAND looks at our current food supply as well as a variety of organic options available to consumers who want to support sustainable farming methods. It is not just about the fight, it is about potential solutions and available options. It is about choice, family, children and future. OF THE LAND looks at a variety of smaller, organic farming models, and traditional farming methods as options to combat the new GMO dominated industrial revolution.

Check out our new non-fiction titles, beautifully displayed as you enter the Library through our South side entrance. Dozens of new nursing titles, a collection of rain gardening and foodscaping topics,manufacturing, welding and the list goes on…

END_OF_DOCUMENT_TOKEN_TO_BE_REPLACED

The first full-scale textbook of its kind, Globalization: A Basic Text provides a balanced introduction to the major topics in globalization studies. Written in a highly accessible style, and drawing on sources both academic and popular, the book adopts a definition of globalization that emphasizes transplanetary flows and the structures that both expedite and impede those flows. Driven by a range of theories from imperialism and Americanization (and anti-Americanism), to neo-liberalism and the neo-Marxian alternatives, as well the major types of cultural theory, the book examines the key events in the history of globalization, and the principle flows and structures produced in the course of that history. Among the major topics covered are the economy, culture, technology, media and the Internet, migration, the environment, global inequalities, and the future of globalization. Making extensive use of maps and with a glossary of key terms, this book offers the reader not only a descriptive, but also a critical, analysis of globalization. (From Google Books)

Can ethical sourcing genuinely address the problems facing workers and producers in developing countries? Detailed case studies explore fair and ethical trade systems in diverse countries and sectors, allowing a balanced analysis of this global phenomenon. A wealth of analysis and discussion from the foremost academics and practitioners working in ethical sourcing Ethical sourcing, both through fair trade and ethical trade, is increasingly entering the mainstream of food retailing. Large supermarkets have come under pressure to improve the returns to small producers and conditions of employment within their supply chains. But how effective is ethical sourcing? Can it genuinely address the problems facing workers and producers in developing countries? Is it a new form of northern protectionism, or can Southern initiatives be developed to advance the monitoring and verification effectiveness of ethical sourcing? How can the rights and participation of workers and small producers be enhanced, given the power and dominance of large supermarkets within the global food chain?This book brings together a range of academics and practitioners working on issues of ethical sourcing in the global food chain. It critically explores the opportunities and challenges of ethical sourcing in the global food system by combining analysis and case studies that examine a range of approaches. It explores whether ethical sourcing is a cosmetic northern initiative, or it can genuinely help to improve the conditions of small producers and workers in developing countries. (From Google Books)

Once considered an inexhaustible source of food, the oceans are now in danger of being significantly depleted. Matt Damon hosts “The State of the Planet’s Oceans” as award-winning filmmakers Hal and Marilyn Weiner investigate the health and sustainability of the world’s oceans and the issues affecting marine preserves, fisheries, and coastal ecosystems in the United States and worldwide. (From YouTube)

http://dgjigvacl6ipj.cloudfront.net/media/swf/PBSPlayer.swf
PLAN B: Mobilizing to Save Civilization features Lester Brown, environmental visionary and author of “Plan B.” This documentary delivers a clear and unflinching message – either confront the realities of climate change or suffer the consequences of lost civilizations and failed political states. Brown, together with other notable scholars and scientists, including Nobel Laureate Paul Krugman, Pulitzer Prize winner and New York Times columnist Thomas Friedman, former Governor and Secretary of the Interior Bruce Babbitt, provides a glimpse into a new and emerging economy based upon renewable resources as well as strategies to avoid the growing threat of global warming. (From PBS)

There is enough carbon trapped in the Canadian tar sands to plunge the earth into irreversible climate change, and it is the Keystone XL pipeline that will set that carbon free. Is this 2,100-mile steel pipeline a vital piece of our nation’s energy future or the conduit for global climate disaster? In The Pipeline and the Paradigm, Samuel Avery investigates the economic, ecological, political, and psychological issues behind the Keystone XL — a project so controversial it has inspired the largest expression of civil disobedience since the Civil Rights movement in the 1960s. In this thoroughly researched, wholly engaging book, Avery takes readers from enormous tar sands mines in Alberta to a treetop blockade in Texas to meet the people and explore the competing interests that power the environmental issue of our time.