Intelligence: The Secret World of Spies, an Anthology, Fifth edition

This book will be of interest for history, political science, and security studies. “A diverse, comprehensive, and highly accessible set of thirty-three readings by leading experts in the field. […] features coverage of many topics including methods of intelligence collection, intelligence analysis, the danger of intelligence politicization, relationships between intelligence officers and the policymakers they serve, covert action, counterintelligence, accountability and civil liberties, and the global struggle against ISIS. New articles focus on a range of important historical and current topics in intelligence, including the President’s Daily Brief, Social Media intelligence (“SOCMINT”), drone warfare, and the implications of Edward Snowden’s controversial intelligence leaks.” — Publisher

The Real North Korea: Life and Politics in the Failed Stalinist Utopia

Useful for historical research as well as political science and security studies, this paperback edition of the acclaimed 2013 book is fully updated and revised. It is a history of North Korea, but the topical organization and extensive index make it easy for readers to drill right down to specific information. The author draws on sources ranging from international intelligence to personal interviews. “A native of the former Soviet Union … [Lankov] lived as an exchange student in North Korea in the 1980s. He has studied it for his entire career, using his fluency in Korean and personal contacts to build a rich, nuanced understanding. […] Lankov substitutes cold, clear analysis for the overheated rhetoric surrounding this opaque police state. After providing an accessible history of the nation, he turns his focus to what North Korea is, what its leadership thinks, and how its people cope with living in such an oppressive and poor place. He argues that North Korea is not irrational, and nothing shows this better than its continuing survival against all odds.” — Publisher

Read this series to discover the secrets behind some of the world’s best-known people, including authors, artists, politicians, and more!

Title: Tailspin: The People and Forces Behind America’s Fifty-Year Fall–and Those Fighting to Reverse It

How Shady Political Operatives and Fake News Control What You See, What You Think, and How You Vote 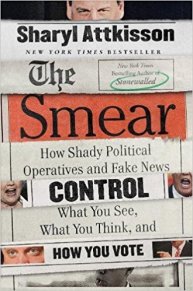 Behind most major political stories there is an agenda: To destroy an idea or the people advancing it. Maybe you watched someone on the news report that Donald Trump is a racist misogynist, read that Hillary Clinton used a body double, or heard that Bernie Sanders cheated in the primary. Regardless of accuracy, the themes get repeated until they become accepted by many as the truth. It’s called “the smear.” Sophisticated operatives work behind the scenes to establish narratives, manipulate journalists, and shape the images you see every day. Nothing is by accident. Now investigative journalist Sharyl Attkisson takes you behind the scenes of the modern smear machine, exploring how operatives from corporations and both sides of the political aisle have manipulated a complicit mainstream media to make disinformation, rumor, and dirty tricks defining traits of our democracy. Pulling back the curtain on the shady world of opposition research, she reveals how those in power create well-funded, organized attack campaigns to take down their enemies and influence your opinions, offering an examination of the think tanks, super PACS, LLCs, and nonprofits that have become the hidden backers of some of the biggest smears in American politics. And she doesn’t just tell stories — she names names, sharing her account of how smears take shape and who their perpetrators are — from Clinton confidant Sidney Blumenthal to liberal political operative David Brock, who, along with his expansive Media Matters for America empire, has been rewriting the rules of the smear game for decades while raking in millions of dollars in generous compensation. In addition, Attkisson reveals transactional journalism and exposes scandalous emails behind the smear industrial complex, showing how Campaign 2016 became the exclamation point on the thirty-year evolution of the smear machine. Dissecting the most divisive, partisan election in American history, she explores how both sides used every smear tactic as a political weapon, culminating in Donald Trump’s hard-fought victory, even as his detractors have continued their smears against him into the Oval Office. What emerges is an assault on the mainstream media’s willingness to sacrifice ethics for clicks, and the cynical politicians and high-paid consultants who exploit this reality. A critical discussion for this perilous moment, The Smear is a look at how the black market serving professional propagandists really works.

My Front-Row Seat to the Craziest Campaign in American History 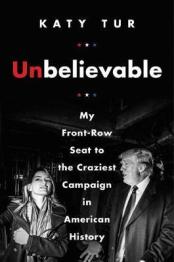 Katy Tur lived out of a suitcase for a year and a half, following Trump around the country, powered by packets of peanut butter and kept clean with dry shampoo. She visited forty states with the candidate, made more than 3,800 live television reports, and tried to endure a gazillion loops of Elton John’s ‘Tiny Dancer’ — a Trump rally playlist staple. From day 1 to day 500, Tur documented Trump’s inconsistencies, fact-checked his falsities, and called him out on his lies. In return, Trump repeatedly singled Tur out. He tried to charm her, intimidate her, and shame her. At one point, he got a crowd so riled up against Tur, Secret Service agents had to walk her to her car. Through all the long nights, wild scoops, naked chauvinism, dodgy staffers, and fevered debates, no one had a better view than Tur. This is her darkly comic and often scary story of how America sent a former reality show host to the White House. It’s also the story of what it was like for Tur to be there as it happened, inside a no-rules world where reporters were spat on, demeaned, and discredited. Tur was a foreign correspondent who came home to her most foreign story of all. Unbelievable is for anyone who still wakes up and wonders, Is this real life?

How Common Core Fights Parents for Control of American Kids

In 2009, a conglomerate of unelected, self-appointed officials met behind closed doors to create a set of rules that would outline what children must learn in every grade in core K-12 classes. In 2010, the Obama administration required states to use these rules for curriculum and tests to have a chance at extra federal money during the Great Recession. Three years later, most Americans told pollsters they had no idea what common Core was. Their children were beginning to find out, however. Pullmann tugs on a thread that leads to a big tangle of history, politics, and intrigue that together help explain why small children must sit and cry over math homework while their parents look on helplessly. Early test results suggest Common Core means American kids will learn less. Why, then, did we do it? Who made out like bandits while kids and self-governance suffered? And how can Americans ensure their children won’t be served the same rewarmed brain hash they have rejected time and time again?

This volume explores the topic of the Arab Spring, the revolutionary wave of demonstrations and protests occurring in the Arab world that began in late 2010, by presenting varied expert opinions that examine many of the different aspects that surround this issue. The viewpoints are selected from a wide range of highly respected and often hard-to-find sources and publications. Allows the reader to attain the higher-level critical thinking and reading skills that are essential in a culture of diverse and contradictory opinions. (From Google Books)